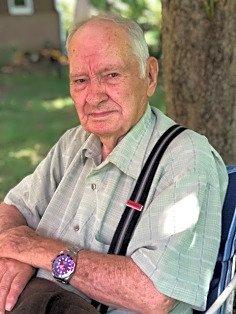 Obituary Notice
York – Thomas “Dabber” Jefferson Wilson, 93, passed away peacefully at home surrounded by his loving family. Dabber was born 02/25/1927.
His gravesite services will be on November 16, 2020 at 2:00 PM at Lakeview Memory Gardens, with Eric Whitstine officiating.
Dabber attended York Schools in York, SC. He served in the U.S. Army during the Korean War from 1949-1951. After his discharge from the ARMY, he went to work for Cannon Mills Textile and worked there until they closed for 68 years.
Dabber is survived by his wife, Nell Caldwell Wilson for 71 years. His daughter, Diane Wilson Turner, from Fort Mill, SC, and Gail Brandon Wheeler (Earl) from Spencer Mountain, NC. His son, Thomas Jerry Wilson (Karen) from Sharon, SC, grandsons, Thomas Lantz Turner (Christy) from Fort Mill, SC and Thomas Jerry (TJ), from Rock Hill, SC. His sisters, Helen Connelly of York, SC and Brenda Wilson Crisp from Gastonia, NC, and his brothers, Robert Franklin Wilson of York, SC and Gene Wilson of Smyrna, SC. He has many nieces and nephews, 2 great grandchildren and 5 great great grandchildren.
In addition to his parents who were preceded in death are 3 brothers and 1 sister.
Memorials may be made to the VFW Post 12136 Honor Guard, 2063 Kennedy Dr. Indian Land, SC 29707 or Humane Society of York County, 8177 Regent Pkwy, Fort Mill, SC 29715.
Online condolences may be made to the family at www.brattonfuneralhome.com.
Bratton Funeral Home in York is serving the Wilson family

Condolences for the Family of Thomas Wilson