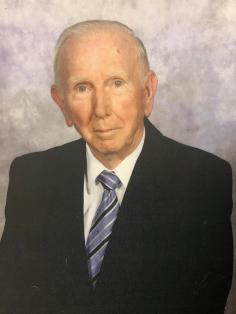 Mr. Robert Parks Dickson, 88, passed away Saturday, May 11, 2019 at Pruitt Health in Ridgeway, South Carolina. He was a lifelong resident of York, SC.
Born in York on January 5, 1931, he was the son of the late Earnest and Rachel Dickson. He graduated from York High School in 1947. He was a member of the York Fire Department and York Rescue Squad and actively served Beth Shiloh Church on various committees. He retired from Rock Hill Printing and Finishing after working there for over 40 years. Bobby also served in the National Guard.
The funeral service for Mr. Dickson will be held at 2:00 PM Thursday, May 16, 2019 at Bratton Funeral Home in York, SC with Reverend Tom McPhail officiating. Burial will follow at Lakeview Memory Gardens Cemetery in York. Visitation with the family will be Wednesday from 6-8 PM at Bratton Funeral Home in York, SC.
Survivors include his son, Robert Morris Dickson; his sister Aileen Dickson Wallace of Rock Hill, SC and his brother Albert Dickson (Elaine) of York, SC; his grandchildren Brenna Dickson Wiles (Austin) of Johns Island, SC and Austen Parks Dickson of Rock Hill, SC; his former daughter-in-law Jean Robinson Dickson, and many nieces and nephews.
He was preceded in death by his wife of 55 years, Eleanor Carroll Dickson; his brothers Lamar Dickson (Betty), Ralph Dickson (Margie), and Harvey Dickson (Evelyn), and sister Sara Dickson Sears (Carroll).
The family is very grateful to their friends, neighbors, church and family members for their love and support and visits. Thanks to Janet Blackwell, Ellen Jones, and Cindy Howell for their faithful weekly visits. Thank you to the employees of Pruitt Home Health in Ridgeway and Harbor Chase Assisted Living of Rock Hill for their loving care of Bobby.
Memorials can be made to Beth Shiloh Church, American Parkinson Disease Association, St. Jude’s or a charity of one’s choice.
Online condolences may be made to the family at www.brattonfuneralhome.com.
Bratton Funeral Home in York is serving the Dickson family.

Condolences for the Family of Robert "Bobby" Dickson