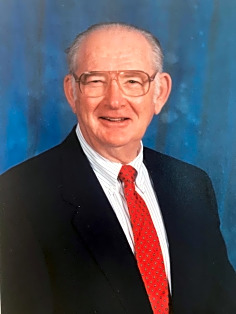 George Tillman Johnson, Jr. (91) now sits at the feet of his heavenly Father. He passed away on June 21, 2020.
Born on June 11, 1929, he was predeceased by his parents, George Tillman Johnson Sr. and Martha Catherine Ford Johnson, and his siblings Katie Lou Culp, Ira Johnson, Horace Johnson, Rachel Germer and David Johnson.
A man of faith and a member of Tirzah Presbyterian Church, he was a loving husband, father, “Pawpaw” and great-grandfather. He loved spending time with his family and discussing politics, business, religion and history just to name a few. He enjoyed a good card game and took great pleasure in winning. In his younger years he raised beagles and loved to rabbit hunt with members of the Indian Beagle Club. After moving the family to the river, he enjoyed gardening, fish fries and even took a few turns on water skis.
A 1945 graduate of York High School, he attended Spartanburg Jr. College and through his roommate met his beautiful wife, Sara. They would have celebrated 72 years of marriage in August.
He spent most of his career working at Brandon Furniture Company in York. After the store closed, he was employed at Gaston Memorial Hospital in the security division. Upon his retirement at age 73, he became a full-time vegetable gardener and spent many hours compiling his family genealogy.
He will be missed every day by the love of his life, Sara Moss Johnson, and his four daughters, Janet Harding (John) of Clover; Lou Robinson of Pendleton; Sandra Magee of Clemson and Lisa Bratton (David) of York; eight grandchildren, John Harding, Kelly Harding McDaniel; Robbie Robinson, Kristie Robinson Gilbert; Russell and Quin Magee; Tyler Bratton and Katherine Bratton Childers; nine great-grandchildren, Megan and Makayla Harding; Natalie, John Marshall, Paul, Anna and Matthew McDaniel; Cooper and Banks Gilbert; Finley and Sara Childers.
The family would like to thank the loving staff at White Oak Manor in York for their excellent care and friendship for “Mr. George” over the past four years.
A celebration of life will be held at Tirzah Presbyterian Church on Sunday, June 28, 2020 at 2:00 pm (masks required and will be provided). In lieu of flowers, memorials may be made to Tirzah Presbyterian Church, 180 Tirzah Rd., York, SC 29745. Condolences may be expressed online to the family at www.brattonfuneralhome.com.
Bratton Funeral Home in York is serving the Johnson family.

Condolences for the Family of George Johnson, Jr