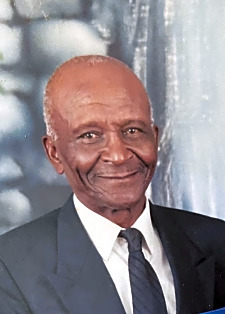 A Home-Going Grave-Side service for Bro. Samuel Lee Carr, Sr. will be held Thursday, May 14, 2020 at the Church of Christ @ Hillbridge Road Cemetery at 11:00 A. M. Bro. Willie Carr will officiate and the interment will follow. The Grandsons will serve as pallbearers.
Samuel Lee (Sam) Carr, Sr., one of ten(10) children born to the union of the late Tobe and Essie Mae Wright Carr, on May 9, 1932 in Chatham County, Ga. He went to be with the Lord, Friday, May 8, 2020, peacefully at his home. Samuel met and married the former Cora Bell Johnson and stayed united for sixty-eight (68) years and to this union nine (9) children were born. Bro. Carr received his Christian beliefs at an early age, and was united with the Church of Christ @ Hillbridge where he attended faithfully with his wife and many family members and friends. He was loved by everyone that he was introduced to. He was a man whom loved God, and loved to do good works towards people. Bro. Carr worked for many years with the Laurens County Public Works Department.
Bro. Samuel Carr Sr. made sure that he was a positive role model so his children would grow up to be the same. He acted in a way that was gracious and caring towards his neighbors and friends. Although with limited education, Sam always used common sense when it came to taking care of the things that mattered. His wife and children were his biggest priority. When he found the time, Sam enjoyed hunting and gardening. Without a second thought, Samuel would share what he had to help those who had less.
Left to cherish his memories and mourn his passing, wife, Mrs. Cora B. Carr, nine children, Willie(Shirley) Carr, Ronnie Carr, Randy Lee(Lucretia) Carr, Loran(Timothy) Moye, Samuel Lee(Rochelle) Carr Jr, Micheal Jerome Carr, John Christopher(Sherika) Carr, Gerald Tyrone(Heather) Carr, Joel Cornelius(Tonya) Carr, his siblings, Hattie Mae Thomas (late Theodore), Margie May Fullwood (late Moses), Geneva Blash (late Clint), Harry Carr, late Horace Carr (late Lena), Shirley Oneal (late Willie Jean), Eva Dean Polite (Frank), Carnell Carr (Gayle), Myrtice Cummings (James), several brother and sister in laws, 33 grandchildren and 21 great grandchildren and a host of other relatives and friends.
The family residence is located at 605 Garfield Street, Dublin, Ga.
Arrangements entrusted to Wyche’s Funeral Home. (www.wychesfuneralhomeinc.com)

Condolences for the Family of Samuel Carr, Sr.