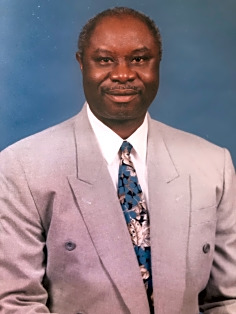 Howard affectionately called Taylor was born February 21, 1943, to the loving arms of the late Marie Lewis Taylor and the late Ceasar Taylor in Thomasville, GA. He attended Douglas, the only Black school for students in grades Kindergarten through High School, graduating in 1961 in Thomasville. Howard began his higher education pursuit at Howard University as an engineering major before enlisting in the Air Force where he specialized in Information Technology. During the same time, he also took classes at Mid-Western State University. He was stationed at Shepherds Air Force Base in Wichita Falls, Texas. Howard received his BS in Management.
Howard met and married the love of his life, Virginia Rae Walthall Taylor on October 1, 1966, while stationed in Wichita Falls. They have two daughters, Marina Taylor Hopkins, and Yolanda Taylor McPeters. Taylor enjoyed singing, laughing, eating, car rides, travelling, and motivating young people. He especially enjoyed spending time with his two granddaughters, Sjaya and Taylor.
Taylor moved his family to Pasadena, California in 1967 to begin his career in information technology at Jet Propulsion Laboratory in mission control. His skills lead him to work for many great places like Avery Label. He had an entrepreneurial spirit. He had his own tax business called HT Tax as well as computer consulting. He has spent the last 15 years working for Clarksville Independent School District as the Director of Technology. He was dedicated to bringing the best to the students, teachers, and the community. He was very service oriented.