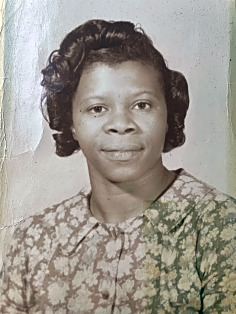 Our beloved France was called home on Saturday November 27, 2021. France accepted the call to Christ at an early age by joining Shady Grove Missionary Baptist Church in Dudley, Georgia. This set the foundation for her becoming an active member for Christ. She was a faithful member serving on the Usher’s Ministry. The Church became an integral part of her daily life and she was intentional about serving both the Lord and the community.

France also attended and graduated from Millville Public School. In 1958, she united with the late Tommy Frank Ashley. France was employed at the Dublin Shirt Factory, where she worked for many years. She was hard-working and quite conscientious. Later in life, she worked at Basset Furniture, then Forsman Woolen Mill, where she later retired.

France leaves to commemorate her life and cherish in her memories her children: Quincelynn (Tony) Brown of McDonough, Georgia; Luddie Fields of Conyers, Georgia; Wilkee (Sandra) Ashley of Dublin, Georgia; Alexander Ashley, Allen (Mary) Ashley, and Walter (Elaine) Ashley all of Dublin, Georgia; and Betty Jean (George) Howard of New Jersey. She is also survived by her sister Yvonne (Malcom) Watkins of Montrose; sister-in-laws Ella Mae (Benny) Ashley and Betty Mack, both of Dudley; and a host of grandchildren, great-grandchildren, nieces, nephews, cousins, and friends.
Friends are being received at the family residence, 1212 Ashley Road, Dudley, Ga.
The family requests that CO-VID 19 precautions be adhered to.
Arrangements entrusted to Wyche’s Funeral Home. (www.wychesfuneralhomeinc.com)