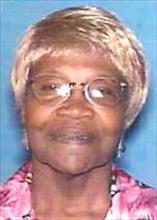 Funeral services for Mrs. Essie Mae Patterson, of Dublin, will be held on Thursday, June 12, at 11:00 AM at the Williams Chapel Baptist Church, 1142 Highway 29 in East Dublin. Interment will follow in the Dudley Memorial Cemetery. Rev. Ellis Carswell will officiate.

Mrs. Patterson, who passed on June 6, 2014, was born on August 20, 1932, to the late Gordon and Lennie B. Spikes in East Dublin. She was known by many as "Mrs. Mae". She joined the Williams Chapel Baptist Church at an early age and remained a faithful member until she moved her membership to Central Baptist Church. She was the Founder/Matron of Honor or President of the Eastern Star/Mary Ross Chapter, Dublin. She was employed at Carl Vinson Medical Center of Dublin until retirement. She worked many years as a School Crossing Guard for the Dublin City School System. She was also a family advocate and child care provider for many.

Mrs. Patterson was first in union with the late Nathaniel Mans. Born to this union were two children, Apostle Linda Knight and Larry Mans. Her second marriage was to L. C. Johnson in Akron, Ohio; born of this union were four children, Janice Green, Curtis Johnson, Christopher C. Johnson, Sr. and Valencia Courtney. Her third marriage until his death was to the late Arthur Lee Patterson of Dublin.

The family will receive friends at 104 Kingsby Street, and at the Dudley Funeral Home on Wednesday, 6-7 PM

Condolences for the Family of Essie Mae Patterson