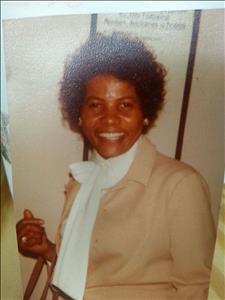 Mrs. Jefferson died Saturday at the OSU Medical Center in Tulsa following an extended illness. She was born in Pawhuska on May 15, 1934 to Ernestine and Eugene Martin. Mrs. Jefferson graduated from Booker T. Washington School in 1952 and was the class Valedictorian. She resided in Pawhuska for 39 years before moving out of state with her family.

She was married May 16, 1970 to Rev. Cornelius Jefferson. She was preceded in death by her husband, and her son Richard Jefferson. Survivors include two sisters, Sammy Howard and Dolly Collins both of Tulsa; three brothers, Joe Martin of San Diego, CA, Ronald Martin of Tulsa, and Edward Martin of Houston; two daughters, Vickie Gibson of Bartlesville, and Rhonda McDonald of Andover, MN; two sons, Donnie Jefferson of Bartlesville and Randall Jefferson of Fort Walton Beach, FL, and a host of relatives and loved ones.

Mrs. Jefferson worked as an elevator operator at the court house in Pawhuska, as a health care professional in the Tulsa School District, and as a hospitality hostess at Furr's Cafeteria. As a pastor's wife, she faithfully worked beside her husband ministering to the members in various ways which included playing piano and singing in the choir.


Condolences for the Family of Edith Jefferson