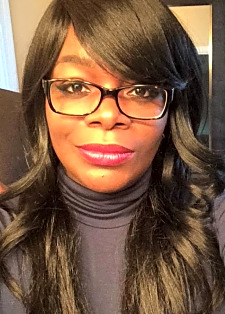 Under the direction of Citizens Funeral Home, 500 E. Church St, Clarksville, TX. Condolences may be made at www.citizensfuneralhome.com.

PLEASE WEAR A MASK FOR SAFETY.

Humble Beginnings:
​On February 13, 1979, a beautiful baby girl was born as the middle child to Janett Lavern Edwards and H.D. Doolittle in Paris, Texas by the name of: Chaka S. Edwards.

Chaka’s Early Years:
At a young age Chaka was given back to God through baptism at Pleasant Hill Baptist Church under the leadership of Rev. Neal. Mrs. Chaka grew up in Clarksville, Texas with smartness, wit, intelligence, and ambition to want more out of life. Once of her many goals was to become an Executive Director before the age of 40, and to make a better life for herself and family, whether monetary or a closer spiritual connection with God.

Education:
Chaka is a 1997 graduate of Clarksville High School. She began her higher education career at Stephen F. Austin University in Nacogdoches, Texas, and at the beginning of her sophomore year she transferred to the University of Texas in Arlington, Texas where she completed her Bachelor of Finance in the Class of 2001.

Professional Career
During her occupational journey, Chaka was employed 12 years at T.D. Ameritrade. During her expansion of time in this company, she wore many hats of leadership which included, Assistant Manager of Risk Management Group, Team manager, Learning and Development Manager, Senior Manager, New Client Development Groups, and Senior Manager of Investment Portfolio/Management Services. In 2019 to the present, Mrs. Richards left T.D. Ameritrade and became an Executive Director, Remote Advice and Site Lead at the now J.P. Morgan Chase & Co. During her executive climb one of her most contingent goals were to incorporate more people of color into higher executive positions in Corporate America.

The Legacy Continues…
Though her journey on this side may have been short lived, she was able to fulfill all her goals, as becoming an executive leader by the age of 35, and the self-satisfaction of knowing her family was well taken care of. Chaka was greeted at Heaven’s Gates by her dear mother, Janett L. Edwards.

Condolences for the Family of Chaka Richard